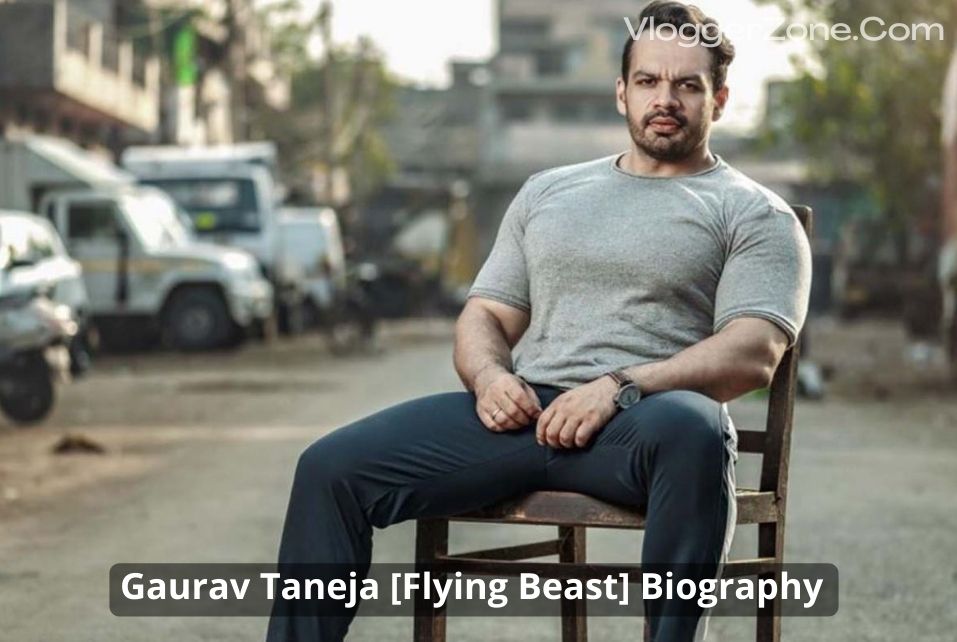 Hello Friends! Today we are going to talk about Gaurav Taneja [Flying Beast] Biography. Born on 9 July 1986, Gaurav Taneja is 34 years old by 2021.

He was born and raised in a middle-class family in Kanpur, Uttar Pradesh, India. He follows Hinduism and maintains an Indian nation.

He is a fantastic body builder and certified trainer. This man is very famous among youth because his amazing work.

As I told he is an inspiration for many of the people. He is famous because of his YouTube channels. He focus exploring India on his vlog.

He basically represents Indian tourism in his vlogs. Her daughter Rasbhari have their separate fanbase. After the birth of his daughter, he becomes more famous.

He has been interested in health and nutrition since childhood, and during his college days, he was known for his bodybuilding, allowing him to pursue a career in the same field by giving tips to others through his YouTube channel.

In 2011, he joined CAE Madrid, Madrid, Spain (Aviation School) to train in the A320 category rating. After completing his training, he started working as the first officer in Indigo. In 2014 he served as a captain in Indigo.

In 2019, he joined AirAsia as a pilot and was recently fired for raising his voice in the media and on social media about irresponsible behavior regarding the safety of his pilots.

With over 13 years of experience in the fitness industry, he has been doing bodybuilding since his college days and sharing his suggestions with others.

Flying Beast is a travel and daily life channel where Gaurav and his wife share videos related to travel. He does lots of traveling and believes in exploring the world.

On this channel, he also shares his personal life with his fans, which you can find online, which are unique and interesting Vlogs. He works hard and uploads daily videos on his main YouTube channel.

He has posted about 638 videos on this Flying Beast channel and has over 4.7 million subscribers. He will defiantly cross 5 Million soon.

Gaurav Taneja or Flying Beast is an Indian You Tuber, business pilot, and nutritionist. As of 2021, he has a worth of $ 2 million.

He is best known for fitness, gaming, and making YouTube videos about his daily life. He is such a multitasker, in the other words we can say that he is an one man army.

What is the salary of Gaurav Taneja?

He and his wife are captains of the aircraft earning Rs 7 lakh per month, so their total income from their jobs is Rs 14 lakh per month.

Their YouTube channel gives an average of 95 million views per month, which is huge and on par with many international YouTubers.

Depending on the Indian CPM, it will take 14-15 lakhs as an advertisement and 4-5 lakhs from sponsorship.  We did not add any income from their fitness channel or gaming channel.

Since he lives a modest life, there may be other significant sources of income from the investment.

So they both earn around 35 lakh per month and 4 crores 20 lakhs rupees per year. Realize that these are all assumptions; these figures can be wrong because they are just assumptions.

What is Gaurav Taneja doing now?

Gaurav Taneja is a professional pilot who captains short flights to IndiGo and Air Asia India. . “It worked, and that’s where the journey started.”

Gaurav Taneja now has a record of his daily life with his wife Ritu Rathi, an aviator, and their child, Rasbhari.

Why was Flying Beast suspended?

Flying Beast made a dedicated video where he explains why he got suspended.

He gave the example of the Imphal airport, where the aircraft is much lower than other airports close to landing.

When an aircraft secretly crashes, it must have traction to slow down, in which case a pilot must land a “flap full”.

But to achieve the goals, what will people do? They will make flap 3 landings whether it is safe or unsafe. This directly affects the safety of passengers.

In the event of an unfortunate incident on the Flop 3 landing, it would be alleged that the pilot was more interested in saving fuel to the more than 180 passengers who were staying with him on the flight.

On May 30, he received a letter deleting his video (in which he said he would lose his job) and apologizing. He said that he is more likely to face false accusations. The DGCA later confirmed that Air Asia India was under investigation.

How did Gaurav Taneja become a pilot?

After graduating from IIT Kharagpur, Gaurav Taneja started his journey as a pilot. He started his career as a pilot in 2011 when he joined Indigo Airlines. He then moved from Indigo to Air Asia in April 2019.

Best Vlogging Lens For Sony A600

He is a YouTuber, Pilot & Bodybuilder. So, we can easily understand that he is passionate about and a true learner. He is a true inspiration for millions of people not only in India but all over the world.